My heart broke a little today. For today, we as a nation took one more step onto the slippery slope away from decency and morality. On the anniversary of the Roe v Wade Supreme Court decision, as a sample of women from different races and ages gleefully looked on, the governor of New York, Andrew Cuomo signed into the law the most radical abortion legislation we have ever seen.

While my heart breaks for the millions of babies murdered every year, I am angered and disgusted by the fact that we have allowed this to happen in our nation. Women are high-fiving and celebrating; dancing, crying with joy at their newly received freedom. Our elected officials are proud to have passed such empowering legislation, and Andrew Cuomo is flaunting his accomplishments on social media like he is some kind of hero. No, Governor Cuomo you are not a hero; you are a wicked man. You have the blood of millions of innocents on your hands.

As I look at photos of One World Trade Center and the spire lit up pink in celebration of this decision, I find it ironic, that the building erected to honor the death of thousands, is now celebrating the murder of millions.

It is obvious that our culture is drifting further and further away from any sense of the Godly morality our country was founded on. My question is, how long will God remain patient with a country that is sacrificing children to the god of Self? Galatians 6:7 tells us that “God will not be mocked. Whatever we reap, we will sow.” I am afraid for our nation and I weep for it.

So what are we to do? I have been asking myself this question over the last few days. It isn’t practical for everyone to be camped outside of abortion clinics or attending rallies.

I am realizing that it’s time to take a stand. Many of you are weary, but it’s time for Christians to stop being afraid and start being bold. It’s about preaching Christ and His power to transform lives. God’s arm is not short, but His church is anemic and passive. We are afraid to speak out because we might lose friends or offend family members. We are afraid to post on social media, because we don’t want to rock the boat. Let me tell you something -the boat needs to be turned over! It’s time to get into the battle Christian. It’s time to pray! The enemy is alive and well and is no longer hiding his tactics; he doesn’t need to anymore.

Dr. Martin Luther Kind Jr said “He who passively accepts evil is as much involved as he who helps to perpetrate it. He who accepts evil without protesting against it is really cooperating with it.”

I believe we are at a turning point in our culture. As Christians we know how this all ends, and we are hopeful. But until then, lets take up are armor and finish well.

Lord, help us to see life through your eyes. Help us to take our focus off of ourselves and place it on Your purpose for us. Bring our leaders to repentance and help them to see the wickedness they are perpetrating in our culture. Help us to realize that You have called us to be Your voice here and to use them for Your glory and for Your kingdom. Help us to finish well, Lord. Amen. 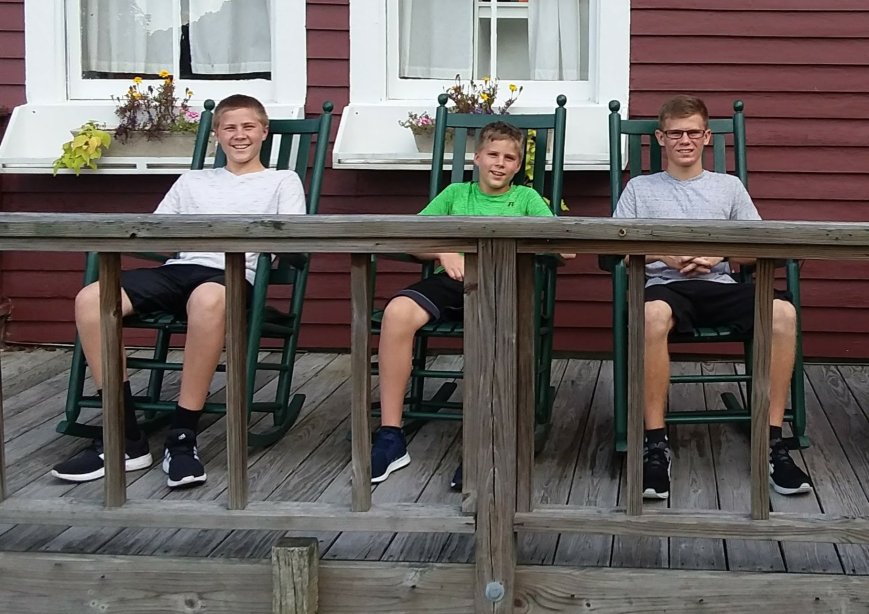 As I sit here writing this to you, you are in the midst of a cultural war against manhood. The message that is being shouted into our society is not one I want you to hear or listen to. What I want you to hear is this message from me: you were created in God’s image. He has a purpose for you. You were born to lead, provide, love, and serve. That is how your dad and I have raised you. So walk forward and grow to be men, my sons, and don’t be ashamed of who God has designed you to be.

Go ahead and blaze the trail through the woods with your machete, my sons. Because one day you may lead a nation.

Go ahead and learn to responsibly and respectfully use that gun, my sons. Because one day you may need to protect your own families.

Go ahead and love your country and those who have served for your freedom, my sons. Because one day you might have to fight for them.

Go ahead and climb that tree, my sons. Because one day you may need to rescue your daughter’s kitty or save your son’s kite.

Go ahead and hunt those deer and snag those fish, my sons. Because one day you may need to provide food for your families.

Go ahead and learn how to build a fire, my sons. Because one day your own children will learn that sometimes they need to go back to basics and be content with simple entertainment.

Go ahead and knock down that bully, my sons. Because one day you may have to defend the weak and helpless.

Go ahead and dig in the dirt, my sons. Because one day you might have to toil to make ends meet.

Go ahead and lift those weights, my sons. Because one day you might carry someone to safety.

Go ahead and love others, my sons. Because one day you will have to show the world that real men can be kind and compassionate.

Go ahead and dive into God’s Word and get to know Jesus well, my sons. Because one day the world will look to you for the answer to its problems.

Go ahead, my sons. Be real men, my sons. Your world needs you.

Congratulations on securing the Democratic nomination for president of the United States. It’s historical! It’s liberating to women! You’ve broken the glass ceiling!

But at what cost?

As the mother of a beautiful young daughter, my desire is to teach her every day that she is priceless, valuable and precious beyond anything else in this world. I tell her that God has placed her on this earth for a very specific reason. I make sure that she never doubts her place here.

How exciting it would be for us to celebrate the accomplishments of the first woman ever to receive the presidential nomination of a major political party! Wouldn’t it be amazing if I were able to point my daughter to someone she could look up to and admire? Unfortunately for myself, my daughter and millions of other women in this nation, I can’t.

Sadly, Mrs. Clinton, you have shown not only my daughter but all daughters—and not only in this country but globally—that in order to, in your words, “shatter the glass ceiling” you have to lie, cheat, abuse, insult, bully and ignore. You threaten others along with disrespecting yourself.

Mrs. Clinton, how can I possibly tell my daughter to follow you as an example after you allowed your husband to assault and demean multiple women throughout his political career? Were those women not important? Tell me, will you fight for my rights like you fought for those womens’? Ummmm, I hope not. What about the sisterhood, Mrs. Clinton? Did you expose your husband for his abuse? No! Instead, you enabled him as the abuser and tried to silence his victims. How can you live with yourself? Female empowerment? Nice try!

How can you get up and speak about income equality and then pay your own male executives considerably more than your female staff? How can you receive donations from countries that publicly abuse, shame and even execute their own women? Yet you continue to boast about how you stand for women’s rights. Double standard?

You try your best to relate to those of us who work hard every day to achieve the American dream. You, however, know nothing of struggle. That $12,000 Armani jacket? Those $250,000 speaking fees? They speak volumes. Hypocrisy?

How could I possibly ask my daughter to look up to and trust you? Do you honestly think that you are an example to American children? My daughter watches the news. She has heard about the Americans who were attacked and slaughtered in a foreign land while you stood by and did nothing. Then, with their blood on your hands, you did everything you could to cast the blame on others, eventually telling Congress, “What does it matter now?” Dishonesty?

The fact of the matter is, Mrs. Clinton, that you are no champion of women. You are selling the women of this country a false bill of goods. Unfortunately, many are buying in. I don’t want you fighting for me or my daughter. You have the interests of only one woman in mind here: your own. You have done nothing to bring the United States together. Quite the contrary—you have done your best to divide, and you have succeeded. Congratulations. You crave power, and you will do whatever it takes to get it. You have lied, cheated and let down your own country.

My prayer, Mrs. Clinton, is that I would be able to teach my daughter how to be a true woman. A strong woman. A self-respecting woman. A woman who sees herself through the eyes of her Creator. I pray that she would be a woman of compassion, kindness, service, selflessness. One who has integrity and looks out for the needs of others.

In a way, I guess I should thank you, Mrs. Clinton. You have made it easy to teach my daughter who she does not want to aspire to be. Now may I have the courage to stand up and show her the woman she does want to be.

P.S. By the way, I will pray for the next U.S. president, whether it is Donald Trump or you. God tells us to do so, and He can turn any heart toward righteousness and truth.